This one is a big contributor to why I stopped posting. When about to color it I discovered I had to cut it up in pieces to contain the fills and gradients. I was still commuting by train back then and as such I did much of my drawing while travelling, but I only had AutoCAD at home so I never got around to fixing this one. From finishing the lines it was four months before making the needed fill guide, but then I had moved onto my other figures so it took another six months until I finally colored this one, and as I post them chronologically… yeah. 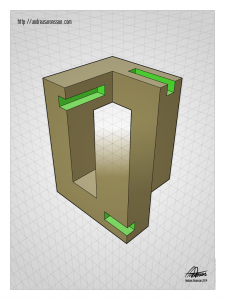 The gap at the top turns into the bottom front pillar.