In January this year there was a contest over at VRSverige.se where one could submit a scenario we wanted to see in VR. I of course forgot all about it until the last day and then spent 5-6 hours brain storming and putting together an entry. In the end I didn’t win anything but it was a fun mental exercise in any case.

This is the image I submitted, all the text is in Swedish but I have provided the translation below. 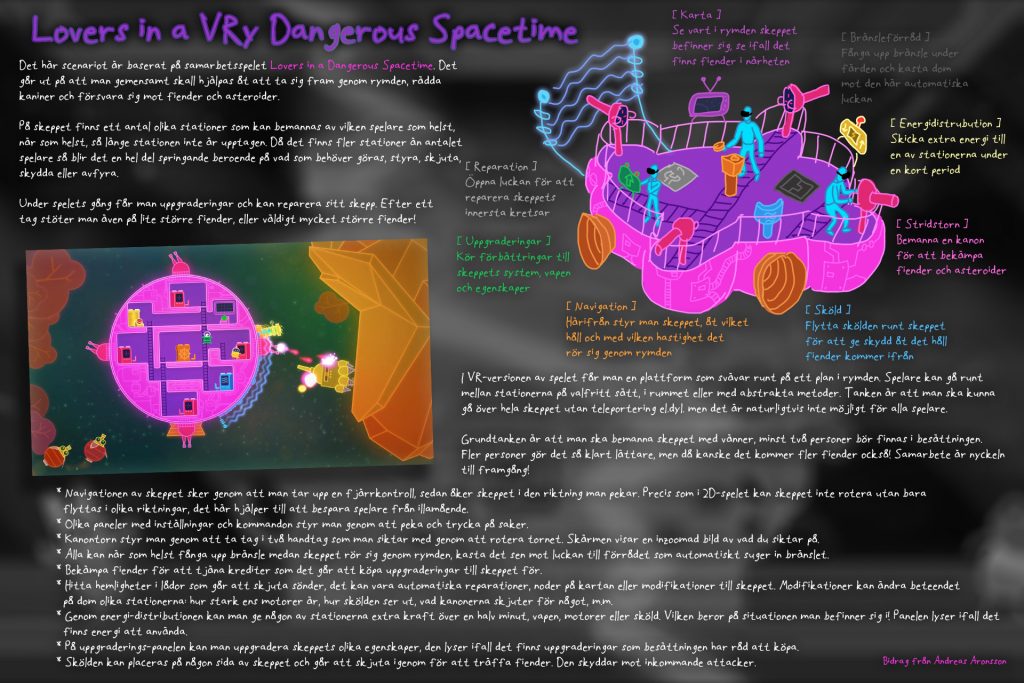 This scenario is based on the co-op game Lovers in a Dangerous Spacetime. The goal of the game is to work together to travel through space, save bunnies and defend against enemies and asteroids.

On the ship there are various stations that can be manned by any of the crew, as long as it’s not already occupied. Depending on what has to be done; steering, shooting, shielding or firing, players have to run to the specific station to perform the task, this as there are more stations than players.

During the journey you get access to upgrades and repairs for the ship. The further you get the bigger and scarier the enemies become.

[Map]
See where in space you currently are, and if there are enemies nearby.

[Fuel storage]
Catch fuel while travelling and throw it towards the automatic hatch.

[Energy distribution]
Divert extra energy to a specific station for a short amount of time.

[Defense turret]
Use this to shoot down enemies.

[Shield]
Move the shield around to defend in the direction enemies come from.

[Navigation]
Use this station to control with which speed and in which direction the ship is moving through space.

[Upgrades]
Invest in your ship to improve the various systems, weapons and properties.

[Repair]
Open the hatch to repair the inner circuits of the ship.

In the VR-version of the game your ship is basically a platform that floats around on a horizontal plane. Players can walk between stations or locomote virtually if your room is not large enough. The game is meant to be a room-scale experience but obviously it will not be possible for everyone.

The point of the game is that you man the ship with some friends, at least a total of two people should be in the crew. More people will obviously make it more manageable, but might also cause more enemies to spawn! Co-operation and co-ordination is key to success!

That is it! Even if it wasn’t a winning scenario I’d still like to experience something like this eventually. I do enjoy co-op games the most out of anything, and in VR it becomes close to normal human collaboration, which can make or break relationships I guess ;)

I’ve been doodling with a whole slew of random projects this year, but have as usual neglected to blog about things, mostly as I bring the project up to a functional level so I can use them but not with the polish with which I’d be comfortable to make anything public. For posterity I need to get some more content onto here though!