One of my current hobbies is to draw impossible figures. I started with this around 1996, but did not continue because growing up got me thinking on other things. It was not until the end of 2006 I decided to take it up again, but then I wanted to go beyond figures drawn in parallel projection so I started drawing them in true three point perspective.

Since then I have refined the process and finished quite a few, but I will post them over time, to get some continuity. They will be sparser after I have gone through my current collection.

With each figure I will attach an explanation to establish why the figure is impossible. 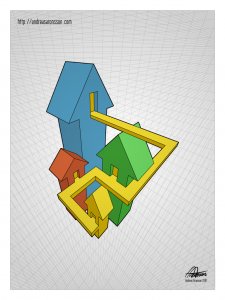 Even though the houses are of different heights the gangway which is perfectly horizontal connects all the entrances.