In August 2004 I was about to fly to London with my cousin to try and get a bit of game time with Halo 2 before it was released. I sent pictures and descriptions to the people I was going to visit while there, so we could actually recognize each other. I had only chatted and socialized with them on a forum previously. One spontaneous reaction to my picture was…

<Stuntmutt> Boll – your head looks the same either way up!

I had sent the picture to my cousin as well, we had not met in eight years at that point so I wanted him to recognize me, we had only been chatting for a few years after finding each other on ICQ. I also sent him this quote as I thought it was quite funny. He promptly photohacked my picture so my head was indeed upside down! He had moved the mouth and nose so they were in my forehead and painted over my original mouth and nose.

Recently I remembered this and decided I would try to recreate it myself, just without moving the nose and mouth and with much higher quality pictures, a small photographic project. I present the result below! 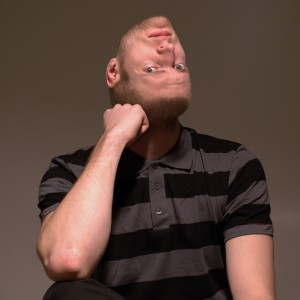 The creation process was quite straight forward. I posed and took a number of pictures with with different hand postures, then I moved the main light source from the ceiling to the floor and angled my head in the opposite direction (both vertically and laterally) compared to the camera. Not meaning that I looked backwards, just as much down as I looked up, and right as I looked left.

In Photoshop I (relatively) simply rotated my second image 180°, extracted my head, put the hand on top, fixed the transition between my neck and head, adjusted the levels and voilá! Nightmares included!

A side note is that I did the actual photo shoot at 1:30AM the night to Sunday. This because I usually shave before going to church service Sunday mornings, and I needed the facial hair for the transition, but as I had a bunch of people at my place until midnight so I could not start earlier! It took me a while to set things up too, the camera, remote shutter, external viewfinder (14″ TV), lighting and positioning. I also took a shower before posing, so summed up it got kind of late! Even so I ended up quite satisfied with the result :)

3 Responses to Chin up!