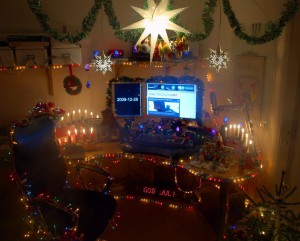 I have never been much of a Christmas decorator. Last year I bought a few metal stars to hang in my windows but otherwise I have almost nothing. This year I noticed a computer Christmas decoration contest over at Sweclockers.com, sponsored by Alina Systems. As I dislike my computer pretty much and the prize was a crazy machine it was not hard to decide to participate. I began looking for decorative items a week or so prior to actually trying my hand at it. In total I went to three shops to get everything I figured I could have use for. Then after the Christmas craze I spent a day decorating, shooting and de-decorating my computer space, on the 26th. I had a vague plan in my head so I went at it without hesitation, but much was made up on the go. You can see a time-lapse of the process and the end result in the video below.

Here is a detailed list of what items I used for my decoration.

As you might have noticed in the video I removed it all the same night, mostly as the heat from the lights were undoing the masking tape that held them in place, and melting the chocolate figures, so it was all falling apart anyway. The result of the contest as not been published yet so there is nothing to report on that front. I’m not even sure if my entry is even considered as I freely interpreted “decorate your computer” into the entire computer space, and really, the computer alone was not roomy enough! 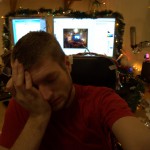 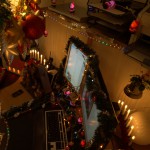 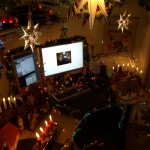 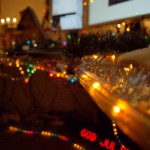 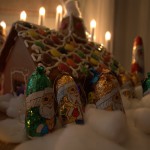 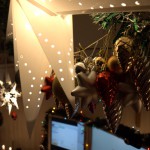 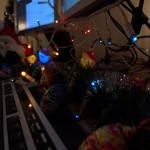 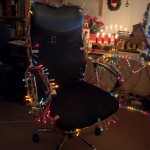 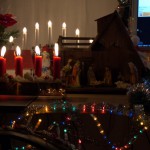 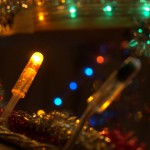 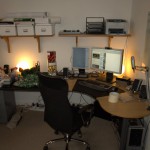 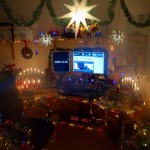 Update: Longplay won the contest with his gingerbread creation :) Well deserved I have to say. I wish I had been less stressed out so I could have been more creative, this time around I got to rely on the overkill-spam tactic, which apparently did not work :x I will try to keep this in mind for future entries, meaning more planning and probably less work!

Update2: Hah! Apparently I got a posting over at the site, awesome! ^_^ Oh, and with that link I just created an infinite Internet loop.