It seems my blog doesn’t get much other posts than my impossible figures! Life has been so busy lately, traveling and such. This one was taking me a lot of time as I could not figure out how to start on the computer. When I finally got my head around it, I realized my sketch was wrong, and after remaking the sketch I could make it! I feel that to explain this one completely I would need to point at it and talk… perhaps that will happen someday! 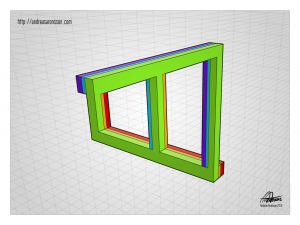 The green part of the figure is taller on the right side than the left, while still being a single object. The colored parts show the conflicting differences in width due to perspective distortion.