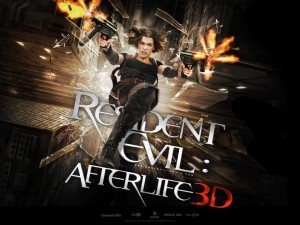 I went to see Resident Evil: Afterlife in 3D with a friend at a theater in the neighbor town. They have recently upgraded to 3D and I was curious to see  what technology they had picked. When it comes to modern technology I have seen 3D films with polarized glasses, circular polarized RealD glasses and now XpandD 3D shutter glasses.

Normal polarized glasses works like a charm for me, with the only problem that you cannot tilt your head because then the image will go dark. With circular polarization you can tilt your head, but when I saw Avatar with RealD glasses I experienced ghosting, and that made the experience feel low quality and tacky to me.

I have been a bit suspicious about shutter glasses as the consumer variant currently is based on 120 hz panels and thus you will get 60 hz for each eye with 50% dark time as the inlet of light alternates. This makes me think of how uncomfortable a CRT screen is in 60 hz. Sure, the dark time will always be 50% with shutter glasses but the flickering might be harder to detect if there were 200 hz panels with 100 hz per eye. That is something I am waiting for anyway!

I don’t know at which hertz they ran the frame sync at this time, but I experienced no discomfort so it seems to work just fine :) If it is 60 hz I might survive that.  Sure the glasses are a bit heavy but I got used to them very quickly, perhaps as I normally wear glasses all the time.

When it comes to the movie itself I think this is the best real action 3D movie I have seen as of yet. Though in that mix are horrible conversions like Clash of the Titans and a bad experience of Avatar but it really felt like they had focused on what would make sense in stereoscopic 3D. As for the story, I will not comment on that. I still see 3D movies for the effect rather than the narrative, though a good story is of course also important :)

All in all I would recommend the movie for the 3D effects, but perhaps not so much for the story. I did raise a skeptical eyebrow for some of the things that happened and I paid way less attention to the story compared to what I usually do! But then again, it’s a zombie action movie!