This year, or last year rather , I had made up my mind that I was going to be smart and make my seasonal card in good time before they had to be sent. Instead of very late like previous years. On Friday the 3rd of December I realized that the upcoming weekend would be the last really free one before the holidays, so there was actually little choice if I wanted to do something serious! I had not really decided what motif I would make, but in my then explosive creative state I promptly decided what to do.

Then I called my CEO, who was on his way home, to ask for permission to use a room at work for this photo project. It was OK! Now I had even more pressure on me as I had actually gotten the opportunity to use a large space!

The same evening, still Friday that is, I got dressed up in a suit, gift wrapped an actual Christmas gift, packed a bunch of camera gear and went out hunting for a spot to photograph myself in. Yes, outside, not at work… you will understand why in a minute or so. After randomly driving through the industrial areas I happened upon a spot between two parking lots which fit what I had in mind. I had been looking for a snow covered place with a tree but not in a forest, it would have been hard to work in an actual forest as the snow lay quite deep.

The time was just past nine and it was snowing, the temperature was -7°C (19.4°F) and it was pitch black except for a few street lights. In this chilly darkness I began setting up my gear. Annoyingly I had problems with one of the remote triggers for the flashes, but I put the second flash in slave mode with a reflective umbrella behind me, this while the front flash still was triggered via radio.

Then I had further problems with the remote for the camera! The signal strength was very weak and I had to do the jump quite a few times as it only triggered about half the time. Most likely it had been lying in such a way that the shutter release button had been pressed continuously while I drove around.

After some time of jumping around, adjusting settings, moving the flashes etc a guard in a security van drove by and parked near my location. I jogged up to the car and before he could ask I told him what I was doing. As I was dressed up in a suit out in the cold with a red hat and a gift under my arm I guess it looked a bit funny, but I explained and even showed him I could trigger the camera from where I stood next to his van. I said I would be done soon and he just said good luck and everything was fine ;)

As usual with my self portraits the process is quite random as I can only guess how it will look. This time it was even more random due to the remote not working properly! The picture I ended up using was not very spectacular, but it had the best placement and looked a bit funny.

In the end I was so cold and tired of jumping around I just decided that I had to be happy with what I got and I packed things up and went home. Not counting the driving the actual photo shoot took about 45 minutes, luckily I had my skiing underwear on as to survive the event :) At home I downloaded the pictures onto my machine and sifted through them.

The photo I ended up using was the second to last shot! I noticed that some ghosting had been introduced as the slave flash lagged a bit and the fast movement of me running and jumping had introduced a slightly transparent version of myself, a ghost. I tried to solve it by sharpening, and… it looked quite fine when scaled down to post card size, but rather crappy cropped. It would have to do anyway. 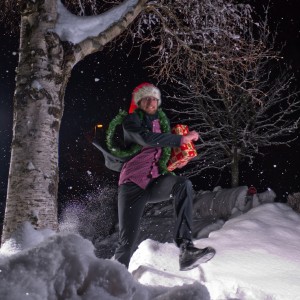 Are we done yet? No! Remember the room I booked at work?… The following morning I packed even more gear into my car and went to my workplace. Before going home for the weekend I had called our CEO and asked if I could borrow a space for a photo project, and as it was OK and I had asked my motivation was high! What? I wasn’t finished with the photography?

Actually I had a different project in mind, and I decided to combine it with the card project. This was what I decided moments before I had called my CEO the day before, due to the short amount of time between the decision and the actual execution I had almost no plans of how to lay things out, only how to make things work! Arriving at work I carted everything to the top floor to set things up. Actually, as this is the… somewhat discreet surprise, I guess you could just as well watch the video now.

Basically I set up multiple foam boards at different depths from the camera so they together would cover a continuous area as seen in the viewfinder. Then I brought a picture of that into Photoshop (actually multiple pictures, that is why I move the furniture around) and I cut up my previous photo and distorted it to fit the foam boards. Then I printed them out, attached them to the boards, set up the lighting and then I went home! I had been there for a bit more than eight hours and I was very tired so when one of the 1000W lights I used for lighting broke I just called it quits and closed shop.

The next morning I brought a friend and I finished the project by shooting the final card picture, doing some video recording and then we cleaned it all out! On the card itself I included a URL to the video, though, from the people I have spoken to so far hardly anyone has noticed the link at all :) 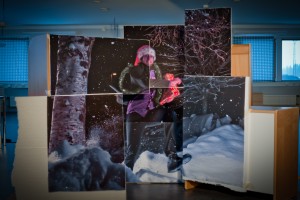 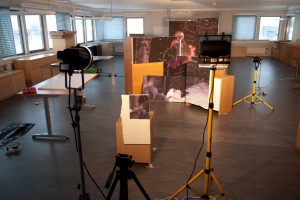 Funny that I wrote so much more about the initial photo shoot that took a fraction of the total time… perhaps I just want to forget the grind that was the second photo shoot! Or, it might be because you can see it all in the video… very well. As a finisher here are a few pictures of all the gear I carted back and forth to work. Hurgh! 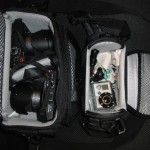 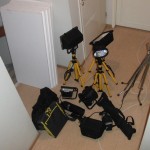 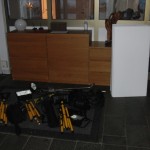 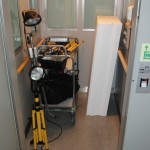 One Response to Chistmas Card 2010