I have always had a fascination with 360 degree panoramas, often when I have been out travelling or just outdoors I place myself strategically and spin on the spot to capture my surroundings. This interest started much earlier than my venture into actual photography though, my first camera was actually a USB webcam.

With my webcam I did a few panoramas of my room when I wanted to document how I had it set up at the time. I would place the camera on a rotating platform and let it take pictures at an interval, the resolution maxing out at 320 by 240 pixels. After that I would stitch them together and spin them around in a Flash application. I have picked out the two most successful panoramas.

In this first panorama, a prominent feature is the Coca Cola portable refrigerator as well as my first very own PC, bought with money I had earned myself! Though at the time it was a bit old.

In this second panorama, done almost a year later, there has been a few upgrades. A new PC, a TV, an Xbox with Halo running and quite many tables. You might also have noticed that I appear twice!

Now ten years later, I have moved out from my previous apartment and am now renting a room for studies. Before I packed up all my stuff I just had to do another room panorama, something I had been planning to do ever since I felt settled there.

So, four days before I was shipping myself away I spent a day to try and accomplish what I had in mind, it was pretty much the last day available as time was running out and I had to pack up all the gear in my living room. Let me first post the result and I will go into how I did it after that!

As you can see, we start out with Halo yet again, now the anniversary edition, appropriate enough. Then we have motorcycle-me, skiing-me, sleeping-me, laptop-me, xbox-me, stepmania-me, party-me and kitchen-me. You can actually find my reflection in the frame of the TV too, that would be photography-me then. Below I will try to very quickly go through the creation process.

First I picked out all the different clothes I wanted to wear, made a loose sketch on where the different characters should be placed and planned at which points there would be seams that had to be stitched later. To get my camera in a vertical position rotating at the focal plane I had borrowed a ball tripod head which I put on my own macro head which in turn was mounted on a borrowed tripod. Thank you Ateljé Digital for enabling me to do this! 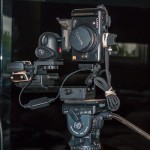 Before capturing all my needed images I experimented with many flash positions and exposure settings. I set the camera to manual mode and fired away. For the shots where a seam in the panorama would be crossing my body I actually used a piece of string to pull at the tripod handle to rotate the camera for a second photograph. A fairly non-scientific method with plenty of randomness but it worked. One mistake was to forget that my camera resets the focus position when restarted so some pictures ended up blurry after a review on my computer as I had turned the camera off.

Luckily I had enough good pictures to make a panorama I ended up happy with. It actually took me almost four months before I sat down and edited it all, as I straight after shooting rushed to finish packing everything for my move! How to fit it all together was hard to imagine in my head, but my original plan worked, and I could Photoshop together people contained in the same photo frame and then stitch a panorama with the resulting composites. The final panorama is just above 81 megapixels, a Photoshop file at 993 MB.

Some of the characters I had planned didn’t actually fit inside the frame of the camera, luckily I discovered that early on and could change my plans. The focus mistake was bad, not fatal, but it did make me nervous when I was going to edit everything together. I ended up being one of those times where the decision to take just one extra photograph actually saved the entire project.

What I really miss with the Panasonic GF1 is a flip-out screen so I can see what I am photographing. It’s quite hard to do these kind of jobs blind with just a remote, I sourly miss the video out I had with the Olympus E-410.

Oh, and one other thing. When doing my panorama sections I did the blood on kitchen-me and some fake shadows, and when I later edited the stitched panorama I realized it should have been much better to add those effects after stitching so I could tweak them easier.

At last a funny detail, kitchen-me is wearing a T-shirt I got from donating blood. And as I have been asked this, yes that actually happened, something people who has been reading this blog would know :P