Should you buy a VR system?

About a week ago I made a flowchart to help people decide if they should buy a virtual reality system right now. I worked on the logics of it for a few evenings after having been inspired by a comment on Reddit. I used a friend as a beta tester and posted the final chart when I felt it was good enough, precisely an hour before the opening of the HTC Vive pre-orders. This is the chart below. 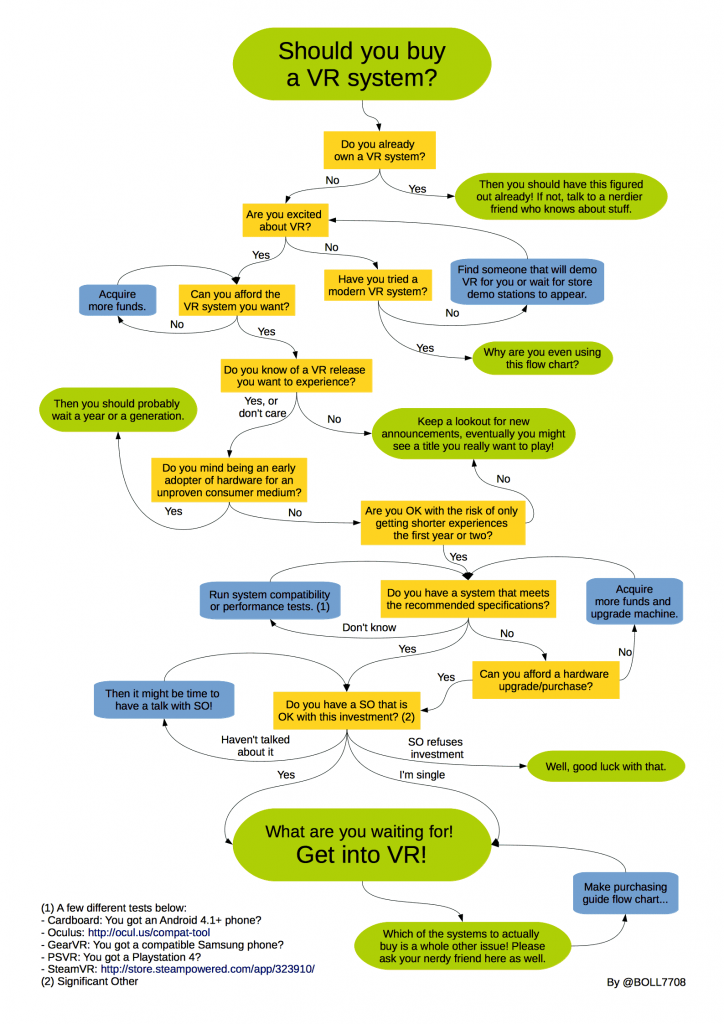 The credit in the corner is my Twitter handle, which also works for YouTube, Reddit, Twitch etc. I posted it on Twitter and Reddit and it seemed to have helped at least a few people with their decisions :) Now I want to expand on my thinking for a few of the steps.

The first question, do you already own a VR system? I added this because my beta tester was an Oculus Rift DK2 owner. He didn’t feel excited by VR at this point as he has experience using it and is fully aware of what it is, but that is also the reason why he will buy it. This meant he broke my flow though, and therefore I added the first step. I have to confess being excited might not be the best choice of word, being interested or fascinated might be better, but it should fit the general bill.

I’ve seen many comments from people saying the upcoming generation of VR hardware is too expensive. In this chart I ask if you can afford it and if you are ready to be an early adopter. As an early adopter you should be aware that you are paying a premium to get the first generation of modern consumer virtual reality. It’s like buying a first generation flatscreen TV or any other bleeding edge technology. The first version is most likely not going to be very affordable compared to products released in the future.

About the risk of only getting shorter or simpler titles the first year. I added this question because we haven’t really seen any of the big studios jump in on virtual reality development. There might be projects we don’t know about, but so far it has appeared to be mostly indies and smaller studios that are taking the risk on this new consumer entertainment medium. Considering that virtual reality development was and is like breaking new ground for developers even if they have had three years since the Rift DK1 a lot of that time might have been spent on experimentation and rapid prototyping, at least I’ve heard multiple developers mention this in talks and round-tables.

That said, considering how many VR games that have been made in the past, the lineup for this push for consumer VR is quite astounding, nothing short of an amazing effort by the entire industry. We will know more in the upcoming weeks as there are media events planned around GDC, which is also the reason why an end state exists where you should be on the lookout for a title that interests you. We simply do not know about all software that will come out yet. Why it is an end state and not a process is because the solution is unknown if it exists, we don’t know what will be announced, this while the fund acquisition processes have fixed goals.

So, what is missing from this chart? It’s mentioned at the end, there is no guide to which system to buy. This is still unclear to myself as well, and I will probably skip making a decision assistant for that, especially as I’m not planning on getting every single system that will release. I might make a comparison of the Rift and Vive later though, but initially those systems are not shipping with feature parity so it’s not very helpful just yet.

One Response to Should you buy a VR system?